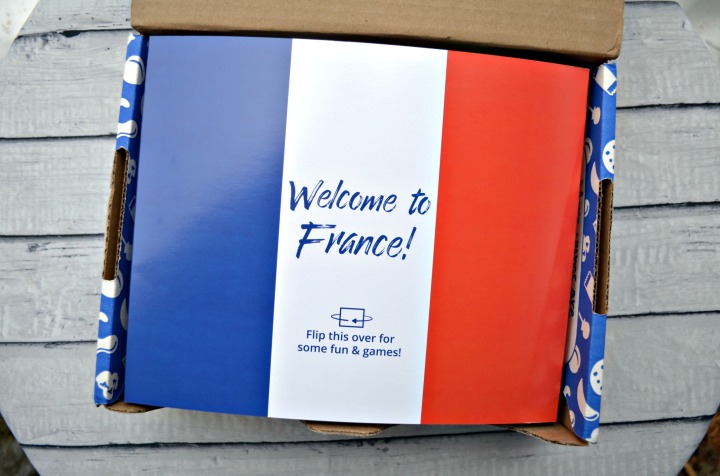 France, the country known for the city of love, the Eiffel tower, and of course for yummy treats such as crepes, baguettes, and macaroons. It is also the country that pioneered the term ‘fine dining’ after a group of French chefs set out to develop a style of cuisine that was distinctly French without any influence from the Western world back in the 1700’s. Though there are some treats in this months box that might seem familiar to you such as potato chips, rest assured that chestnut caramels and violet infused chocolate bars among many other snacks included are purely French, so let’s get right into the snacks from this month’s Universal Yums box and bon appetit. 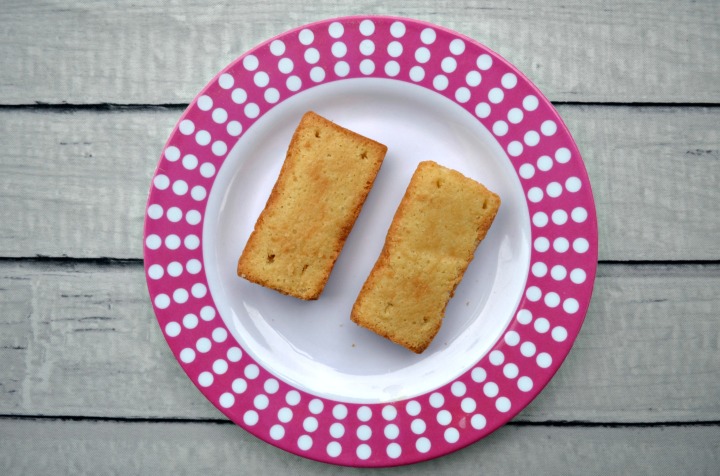 With a moist, almost bouncy texture and a sweet almond flavor, these golden cakes are not only to die for but they also have quite the backstory that has led them to where they are today. Back in the Middle Ages, French nuns who dedicated their lives to helping those in need, started making tiny cakes to give away to those less fortunate. Along came the 1800’s and one of the most well renowned pastry chefs adapted the recipe for these cakes and started selling them in his bakery in the financial district of France. They attracted bankers (financiers) who flocked to the bakery to get their hands on these golden wonders and just continued to grow in popularity.

Just like the story goes, these cakes were really moist and fluffy and absolutely amazing. The flavoring was also perfect with it not being too overpowering or subtle to the point where you can’t tell that they’re almond flavored. Definitely one of my favorite things from this box and something that I would eat over and over again.

Known for its white heart center and sweet aroma, the violet flower is very popular in France and even more so in the town of Toulouse. The flowers have been growing in this town since the 19th century and each year in February, during the peak time of blooming, the town hosts multiple fairs and markets in celebration of the flower. Along with chocolate of course, violets can also be found in a range of other products such as mustard, candies, candles, and soaps.

Dark chocolate really isn’t my thing so unsurprisingly this wasn’t something that I was a fan of and I found that the chocolate was really bitter and too overpowering. I also found that it was a bit difficult to tell that there was any flowers in the chocolate.

With their exotic flavor and aroma, truffles have come to be considered a delicacy in France and are extremely popular among the French. Not only are these mushrooms loved by many for their flavoring, legend has it that truffles supposedly have life giving powers. The story goes that a farmer saw a lightning bolt strike the ground at the base of a tree and there sprout a patch of truffles. After his pig survived after eating one, he tried some as well and went on to have 13 children with his wife.

I’m not a fan of mushrooms and even less the thought of truffles so these chips weren’t my cup of tea. They were however very unique and different from anything that I’ve ever tasted but I wouldn’t go out of my way to eat them again. I also found that they had an almost smokey sort of flavoring to them. 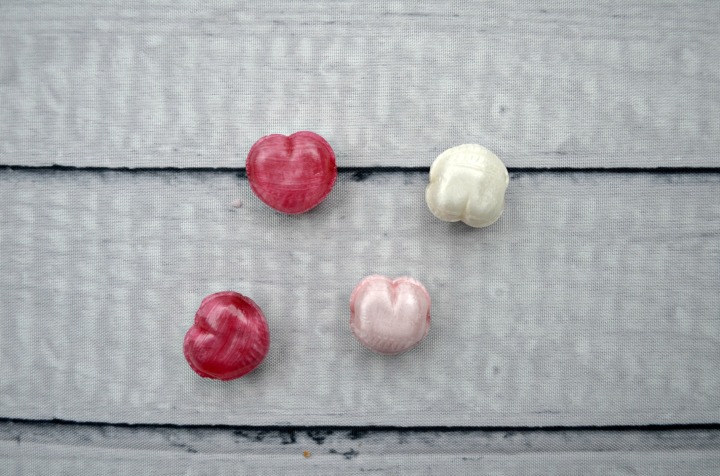 Since February was the month of love, what better way to show someone that you love them than by offering them one of these adorable heart shaped candies. They come in three different colors and consist of a hard candy outer shell with a tangy apple flavor and sweet jam filling in the middle.

Not only are these candies adorable, they were also really good. The flavoring was quite strong right off the bat which was nice and though they were supposed to taste like apple, I found that the flavor tasted more like raspberry or bubblegum. The filling in the middle was also yummy and not too sweet.

Potato chips can be found virtually everywhere around the world and France is no exception. While we eat chips as a snack here in North America, in France they are eaten mainly as a side dish meant to compliment the main meal and are served with dishes such as fish and roasted meats. Since potato chips are so popular in France, there are dozens of different flavors to choose from but the ones that we will be trying this time around are flavored with creme fraiche, which is the French version of sour cream, and sprinkled with parsley and dill.

It was really easy to tell that these were sour cream flavored chips as they tasted very nice and creamy with the perfect amount of herb flavoring. These chips were also quite different from what we have around here and I was pleasantly surprised that they tasted almost identical to what they were advertised to taste like. 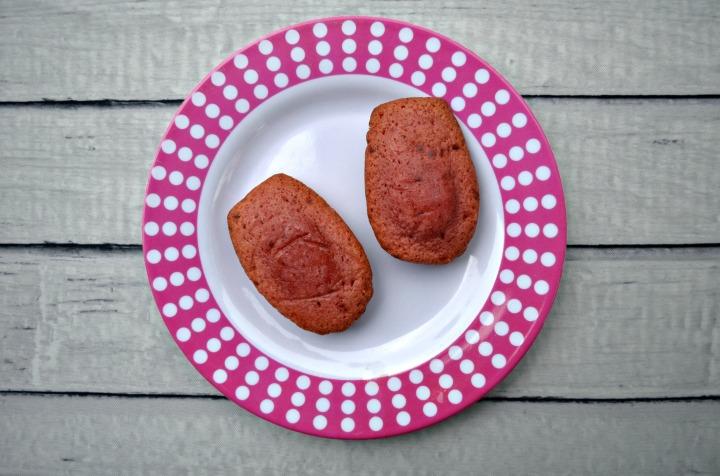 Though the origins of how this treat came to be is quite unclear, one thing for certain is that madeleines are undeniably French and delicious. These shell shaped cakes have been around forever and is one of the many classic French foods. Fresh raspberries are folded into the light and fluffy cake batter to create not only the unmistakable rose colored hue but also the fresh fruity flavor.

These were absolutely amazing and probably one of my favorite things in this month’s box. The cake was really nice and fluffy and not dry one bit. The raspberry flavor was also to die for and had just the right amount of it.

Known to aid in digestion and to boost the immune system, chestnuts have long been loved by people in France and for hundreds of years have been a staple in French cuisine. From October through November, hundreds of chestnut festivals are held throughout the country where the golden-brown nuts are slow roasted, de-shelled, and devoured by thousands of people. Chestnuts are so popular in the French country mainly due to the fact that during hard times in France, entire villages counted on the starchy fruit to survive and thrive. Even better than chestnuts however, are these creamy caramels filled with a silky chestnut cream that are sure to please everyone.

While these caramels didn’t really taste like anything out of the ordinary or unique, they were still quite enjoyable nonetheless. They were really sticky though and kept getting stuck to my teeth every bite I took and it was hard to distinguish the chestnut flavor from the taste of the caramel itself. 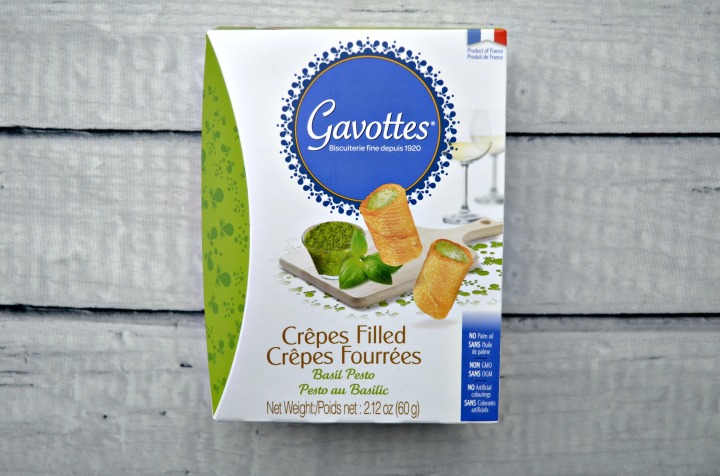 When you think of crepes, one of the first things that comes to the minds of many are thin pancakes filled with either fruits, chocolate, or whipped cream. In France however, crepes are typically rolled up and stuffed with a savory filling much like the ones that we will be trying today. These crispy pastries are stuffed with a basil pesto filling and are handmade using a technique that has been around for years.

Normally I’m a huge fan of anything pesto flavored and I always tend to gravitate towards food with pesto in it, but for some reason I wasn’t really feeling these crepes. Though the flavoring wasn’t terrible, I found that it was a bit too much and too overpowering for my liking.

The west of France has given the world many yummy snacks such as madeleines, crepes, pound cakes, and these butter biscuits. Though at first glance they may look like regular old shortbread cookies, they are so much more than that. These cookies have a delicate flavor along with a crumbly texture, a touch of saltiness, and are made with 100% pure French butter to make them even more delectable.

We have cookies similar to this around here so for me they weren’t anything unique or overly different but they were still good nonetheless. The cookies are very crumbly and can be quite messy but have a simple flavor that isn’t too sweet or sugary like other cookies can be.

One of the most famous and well known cheeses in France is Germain Epoisses and is a soft ripened cheese that is known not only for its creamy texture but also for its not so pleasant odor. The wheels of this cheese are rinsed in brandy and aged in caves for a minimum of six weeks which in turn gives off a smell so pungent, that it is actually banned from French public transportation. While these snack tubes are much less smelly than the cheese they are made with, they still have the bold flavor the this French cheese is known for.

These snack tubes were among my favorite snacks from this months box and had a really nice flavor to them. If you’re familiar with Bugle chips, these tasted identical to those and made for a really nice, light snack.

Though verbena was originally grown in Spain, it was eventually brought over to France and was grown to be used for perfume making. While this popular European plant is still used to make scents, it can also be found more and more in cuisine due to its lemony flavor. The flavor really shines when paired with sweet fruit dishes and desserts as well as these candies which have light floral notes and a delicate sweetness in a crunchy shell.

While I didn’t find that these candies were unique, they were still pretty decent. They tasted like a candy that we have around here but with a stronger lemon flavor. The flavor is pretty apparent in these candies and the more that you suck on them, the stronger and more overpowering the flavor becomes to the point where it almost gets to be a bit too much.

In 1912, a man by the name of Georges Verquin began selling pastries and baked goods in his shop but shifted to making only candies forty years later. This proved to be a great decision as his company Verquin Confiseur is now the largest and one of the most popular family owned candy companies in France. These strawberry bon bons come from this shop and have a slightly hard but chewy outer shell which in turn reveals a softer, strawberry flavored filling.

These were amazing and hands down one of the best snacks that I’ve tried so far in any Universal Yums box. I’m not normally someone who has a sweet tooth and I tend to gear more towards salty snacks but these were to die for. They were really chewy but not to the point of getting stuck to your teeth and the strawberry flavoring was perfect.

So there you have it, another month of trying snacks and candies from Universal Yums. Overall, I found that the France box was one of the best boxes that I’ve received from this company to date and I ended up liking virtually every snack that was included this time around. Stay tuned for next month for a trip to the European country of Poland, and feel free to take a look back at all of the other countries that we’ve visited so far on my blog with Universal Yums.

For more information or to order you own box be sure to check out the Universal Yums website.

happy halloween from me and the cutest pumpkin in the patch 🎃 //
sharing a bunch of pictures on the blog today from our weekend away at the Station du Chêne Rouge a few weeks back🍂 //
a little slice of paradise hidden amongst the mountains 🌿 //
hello september 🍂 it’s officially the season of hoodies, orange leaves, and all things spooky and honestly my favourite time of year 🍁 //