When it comes to abandoned places, many of us tend to associate them with run down houses on the verge of collapsing or graffiti stained buildings waiting to be demolished. Though this may be the case for some, there is still a certain beauty that goes along with an abandoned place. Whether they be houses or theme parks, while they can be a bit spooky, learning about the history and exploring a place that has held so many memories over the years is enough to overcome to scariness of it all.

Built in the mid-1500’s, the Temple of Santiago can be found in the town of Chiapas in the south of Mexico. The temple was never very popular and was built in the hopes of attracting a much larger congregation than it actually did. Two centuries after its construction, the temple was completely abandoned after a smallpox epidemic swept through the area between 1773 and 1776. Fast forward almost two hundred years later in 1966, the building of a dam, which created the Nezahualcoytl reservoir, saw the church disappear completely under 100 feet of water. Depending on the amount of water that can be found at any given time in the reservoir, there are times when the church is fully visible and other times when it completely disappears as if it never existed. In recent years however, Mexico has been experiencing longer periods of drought which has lowered the water level in the reservoir, making the church come alive. This has been attracting more and more tourists to the area with local fishermen offering boat tours to get up close and personal with the ruins. 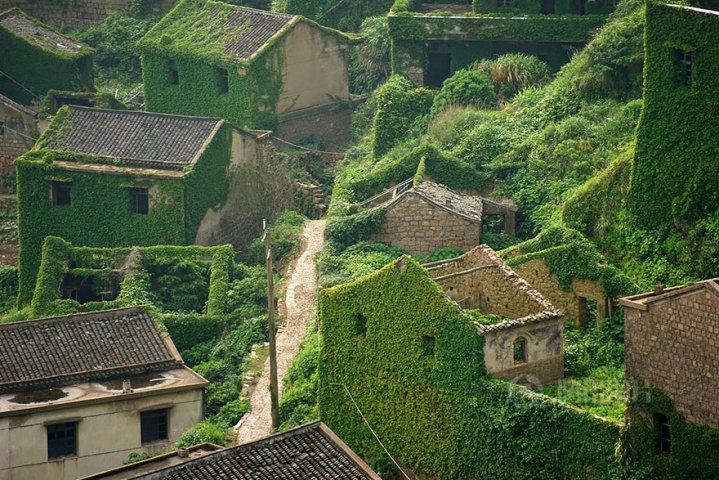 Belonging to a group of over 300 islands in the Zhousan Archipelago, Gouqi Island is home to the stunning, abandoned Houtou Wan village. Once a thriving fishing village, attracting more than 100,000 fishermen per year, the town now sits completely deserted except for a few tourists here and there and the handful of elders who have refused to leave their birthplace. The Houtou Wan village is one of many small villages in China that have been abandoned in favor for a more urban setting with more resources. Though this village may sound like any other ghost town out there, it holds a different kind of beauty that makes it popular with explorers and photographers alike. Over the past few decades nature has been reclaiming back the buildings found here, covering them almost completely in moss, leaves, and vines.

Rusty bed frames, peeling paint, and rotted out furniture is virtually all that remains of the Beelitz-Heilstatten hospital. Most famously known as the hospital where Adolf Hitler recovered from a leg wound at, a large majority of the hospital has been abandoned since 1995. The establishment was built in 1898 and was first designed to be a sanatorium. Remaining as a Soviet military hospital until its closure, the building was abandoned when a plan to privatize the hospital failed. Though the hospital is primarily abandoned, with the surgery room and psych ward no longer in function, there are still sections of the hospital in use today. 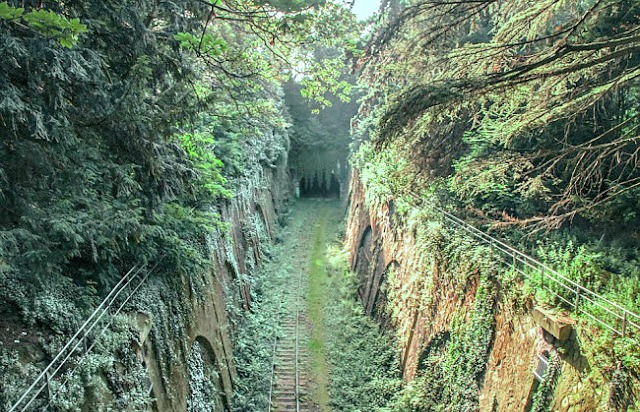 Built in many different parts starting in 1851, the Petite Ceinture railway track in Paris didn’t last as long as hoped and expected. The abandoned 32 km long railway was officially shut down in 1934 partly due to the rise in popularity of motor vehicles as well as the opening of Paris’ metro station system. Though the railway hasn’t been in service for over 150 years, it remains largely intact to this day, with moss, vines, and graffiti covering the walls on either side of the tracks and so because of this, it has become a popular spot for photographers. It is also a hot spot for explorers known as ‘les cataphiles’ because of the many entryways into the Paris catacombs that can be found along the railway tracks.

Resembling a magical, fairy tale castle, the Chateau Miranda is now an eerily, empty palace left to deteriorate. The home was built in 1866 for the sole purpose of acting as a summer home however the architect hired to build the castle died before completing construction. The house was then used by Nazis in the second World War as an orphanage for the next 20 years but was then abruptly abandoned in 1980 and has been deserted ever since. The family who own the house have refused to allow the state to care for the home so it has been left to rot and crumble but has become a popular place for ghost hunters due to it’s dark history.

Known for being one of the first skyscrapers built outside of a major metropolitan city, the Baker Hotel in Texas is now nothing but a distant memory. The grand hotel opened it’s doors in 1929 and was spread out over the span of 14 floors. It was hugely popular in the beginning of its existence and saw famous guests staying here such as Judy Garland, Clark Gable, and even the infamous duo Bonnie and Clyde. By the 1930’s the Baker Hotel became known as a health spa with hundreds of people from around the country flocking to the hotel for the supposed healing powers of the water found in the Mineral Wells nearby. All of the fame and success the hotel received however didn’t last much longer. With the Great Depression hitting America and an advancement in modern medicine, less and less people were putting faith in the healing powers of the mineral water which was the helping hand in the downfall of the hotel. In 1972, the 1.2 million dollar Baker Hotel shut its doors and has been left abandoned ever since.

When the movie ‘The Wizard of Oz’ first came out, it was a huge success and to this day remains one of the most well known stories of our time. In an attempt to make people fall even more in love with the story and to create a place where they could live out their fantasies, a man named Grover Robbins created the Land of Oz theme park in North Carolina. Opened in 1970, the 16 acre park had a huge turn out for it’s opening day attracting more than 20,000 visitors. Guests to the park were invited to start at Dorothy’s house in Kansas and to travel along the yellow brick road right up to the Emerald City to meet with the wizard. Unfortunately though the magic of the theme park wasn’t enough to keep things running smoothly. After the death of the park’s creator not long after the opening, sales decreased drastically. In 1975 there was also a fire in the Emerald City area of the park which destroyed many artifacts from the actual movie that were displayed here. Only a decade after it’s successful beginning the theme park closed it’s doors once and for all. Though the park is indefinitely closed, the park still opens its doors twice a year in celebration of the ‘Autumn of Oz’. 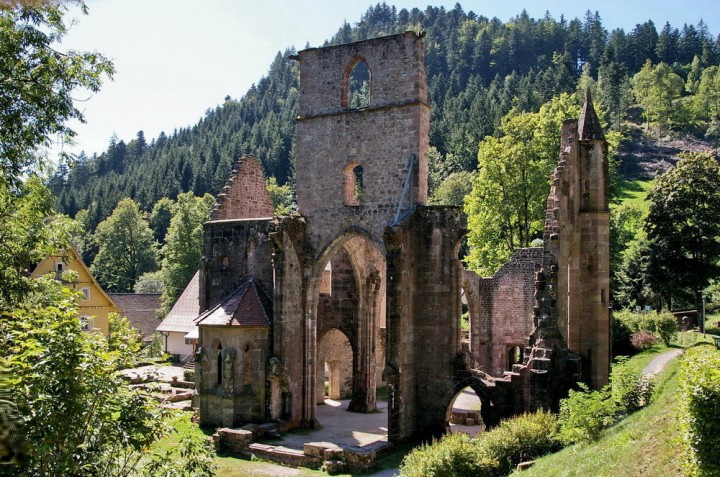 Found deep inside of Germany’s Black Forest are the remains of an ancient and eerie church. The church is the Kloster Allerheiligen, a monastery that was built during the 12th century and consisted mainly of a simple building made of wood. The church got multiple upgrades over the years until it came to be a large architectural wonder made of stone yet what makes this church so unique is the way in which it came to be abandoned and left in ruins. In 1470 much of the church was destroyed due to a large fire that ravaged through the building and history repeated itself when a second fire burnt down the church in 1555. The church was rebuilt and reestablished after each fire, keeping the church alive and running. Luck ran out for the Kloster Allerheiligen in 1804 however when lightning struck the building causing yet another blaze that burnt through the church. After this ordeal people gave up on fixing the building and so it was left to crumble into ruins.

Standing tall in the mountains of Lake Como, Italy is the abandoned Villa de Vecchi, a stunning villa with a dark and upsetting past. The home once belonged to and was named after Count Felix de Vecchi and was built by an architect known as Alessandro Sidoli in the 1800’s. The house boasted features such as a fountain, multiple private gardens, beautiful archways and many other features reminiscent of Eastern style architecture. Sidoli never got a chance to witness his finished masterpiece though as he passed away a year before the completion of the villa. Tragedy struck again not long after that when the Count returned home to find that his wife had been murdered. His daughter was also reported missing with searches to find her proving to be unsuccessful. Unable to deal with all the tragedy and death in his life, Count de Vecchi committed suicide in 1862. The mansion was then left in the hands of the Count’s brother but was abandoned 20 years later. Often referred to as the ‘ghost mansion’, the Villa de Vecchi is a popular spot for ghost hunters and explorers due to it’s haunting past.

Consisting of white temples, houses, and arches, the city known as the Lion City in China has been abandoned and forgotten about for over 50 years. What makes this city so unique is the fact that it is found completely underwater and depending on the water levels, it lies between 85 to 130 feet under the waves. The city is estimated to be about 1,300 years old yet not much is known on its history or how it came to be. The city was covered in water after the Chinese government decided to build a hydroelectric power plant which created a man made lake over top of the city. The ruins of this ancient city can be visited through scuba diving and have surprisingly remained in pristine condition with the surrounding water protecting the ruins against wind and rain erosion.