From cultural and historical to musical, there are hundreds of different kinds of festivals all around the world each year. Though summer may be on it’s way out and it is no longer the unofficial festival season, it is never too late to start planning out which festivals are worth attending next year. Compiled here are some of the most well known and some lesser known festivals that are worth traveling for. 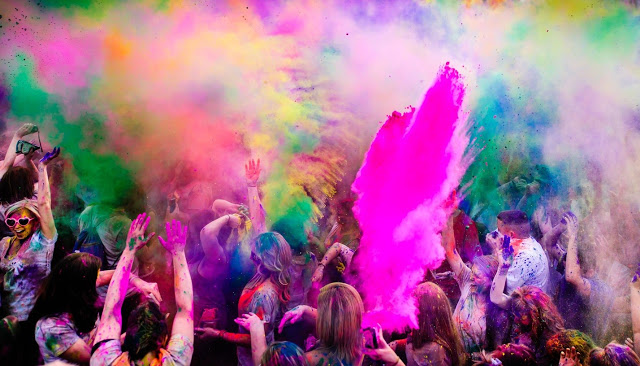 Also known as the festival of colors and love, Holi is a festival celebrated throughout India. It is considered to be a religious celebration within the Hindu religion and is attended by hundreds every spring. Not great for those who don’t like getting dirty, the festival consists of participants wearing all white and throwing brightly colored powders at each other. This signifies the beginning of spring as well as the triumph of good over evil. Along with the powder throwing there is also singing, dancing, and instrument playing involved.

Probably one of the most unique and different festivals on this list is La Tomatina, known to be the largest food fight in the world. Though it is not quite clear on how the festival got its start, it aims to honor the town’s patron saints. Large trucks of over ripe tomatoes are dropped off in the town center and the fight begins. Lasting only about an hour, participants are invited to chuck tomatoes at each other and to slide down tomato streaked slides similar to water slides. The festival takes place every August and sees hundreds of tourists and locals alike partaking in the festivities.

For the past 150 years, the streets of New Orleans have come alive every year to celebrate Mardi Gras. Though the dates are never the same from year to year, the giant street party always happens between the 3rd of February and the 9th of March. Often called one of the craziest parties in the world, Mardi Gras is celebrated for two weeks straight with major parades with floats and marching bands occurring each day. Festival goers dress in elaborate costumes and headdresses in the three colors that represent Mardi Gras which are purple, green, and gold. These colors represent justice, faith, and power.

Known to be one of the biggest rock music festivals in the world is Download Festival. Taking place each June, this festival was started in 2003 and runs for three days. Those attending the festival can expect to see some of the biggest names in the genre playing the main stage with bands such as Rammstein, Disturbed, and Iron Maiden having played the festival in the past years. Though the festival was started in the UK, it has become so popular that in 2016 there was a version in Paris, France that was started and attracted a huge amount of fans in their first year. 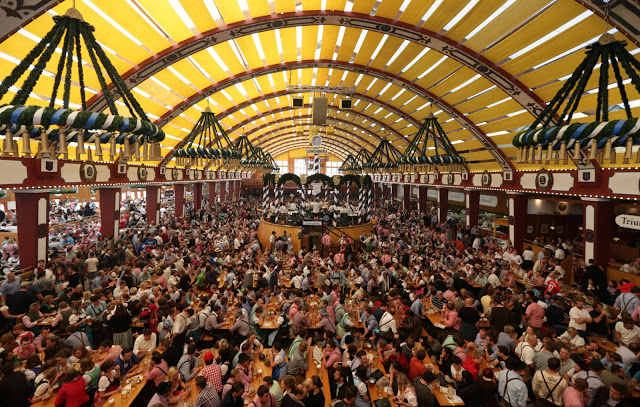 Running from mid-September to the beginning of October is the most iconic, famous festival out there, Oktoberfest. This 16 day festival attracts up to six million visitors each year and is the place to be if you’re a beer lover. Though there are multiple different renditions of the festival in multiple cities around the world, the German Oktoberfest remains one of the most well-known. The festival got it’s debut in 1810 and offers multiple different tents that serve authentic beer and food along with live music. There are also rides, games, and shows to enjoy while sipping on your brew.

Also called ‘Day of the Dead’, this holiday combines both the beliefs of Mexico’s indigenous people as well as the elements of the Christian holiday of All Saint’s Day to commemorate those who have passed away. Dia de Muertos is celebrated between the 31st of October and the 2nd of November with infants being remembered on November 1 and adults the day after. People gather to pray for those family members and to help them on their spiritual journey. They also tend to build altars for those who have passed and they honor the dead with sugar skulls, marigolds and the deceased’s favorite foods and drinks. Since the tradition has been gaining popularity in recent years, 2016 marked the year the first Day of the Dead parade was held with the event expected to rise drastically in popularity.

Found inside of Magic Kingdom at Disney World Orlando is Epcot, home to permanent exhibits representing 11 different countries. Epcot is a regular theme park at Disney but for 75 days from September to mid-November guests can enjoy even more booths representing 19 more nations and countries during the Epcot Food and Wine Festival. One of the best festivals for proclaimed foodies, partake in multiple different seminars, tasting events, and cooking classes that are available during the dates of the festival. The main part of this festival, which first began in 1995, though is to try some of the best dishes out there. Taste test dishes from over 30 different kiosks all offering up food and drinks from all these different countries around the world. 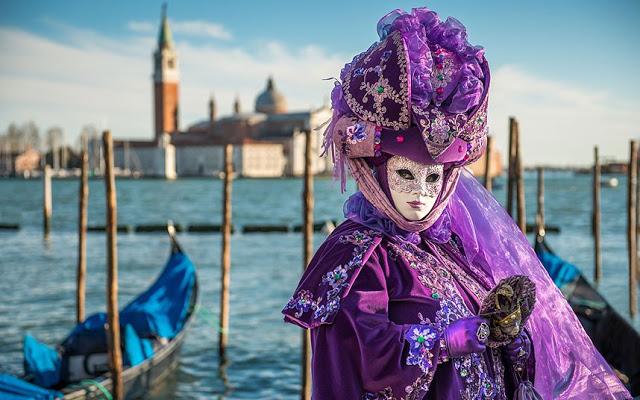 First beginning in 1162 to celebrate the victory over the Patriarch of Anguilea, the Carnevale has long been a Venice tradition. Now used as a way to celebrate the start of Lent and a way to indulge in treats before said holiday, the Carnevale also relives what life would’ve been like in the 18th century. Often said to be the world’s largest dress-up parties, guests attending the festival tend to dress in renaissance clothing along with intricate Venetian masks. Thousands of tourists flock to the Italian city each year to attend this festival and to partake in the multitude of activities offered during the Carnevale. Such activities include theatrical performances, grand processions, and jousting tournaments as well as bands, jugglers, and entertainers that are found throughout the streets.

Located about an hour from the center of Paris in the town of Provins, which is recognized as a UNESCO World Heritage site, is the Provins Medieval Festival. This yearly festival happens every June and lasts for two days where visitors can celebrate all things medieval while enjoying a new theme each year. Festival goers can enjoy food options from that era as well as Middle Age games and traditions. There are performances by jesters, acrobats, and musicians as well as a medieval ball, main parade, and banquets to enjoy.

Created in 2004 by a group of renowned DJs that attracts thousands and thousands of fans each year is the largest EDM music festivals, Tomorrowland.  If electronic/dance music is your thing then Belgium is the place to be this summer. The festival happens every July and stretches out over the span of two weekends with the popularity of the festival rising year after year. Big names in the business such as Afrojack, David Guetta, and Tiesto are among those who have played on the stages at Tomorrowland along with many other popular artists in the genre. The festival has done so well for themselves since their start that it inspired the creation of Tomorrowland Brasil. 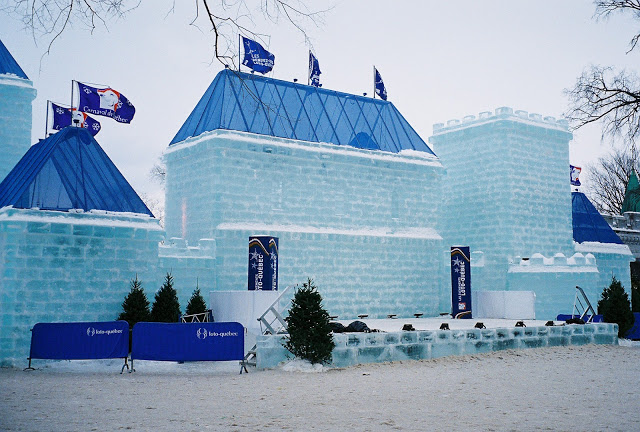 Winter may not be everyone’s cup of tea and with good reason but the people in Quebec City have embraced the long, cold months by creating the Carnaval de Quebec, a way for the population to enjoy and celebrate winter and all that is has to offer. Now known to be the world’s largest winter festival and attracting hundreds of thousands of tourists each season, the Carnaval de Quebec has an abundance of activities to enjoy. Some of these include sleigh rides, amusement park attractions, ice skating, and ice canoe races. Running from the end of January right into the middle of February, this icy cold festival takes place in the historic Old Quebec City, recognized as a UNESCO World Heritage site. This festival is deemed to be a Canadian tradition and offers some major events that make this festival so unique. Such activities include a masquerade ball at the Chateau Frontenac as well as ice sculpture contents on the Plains of Abraham. 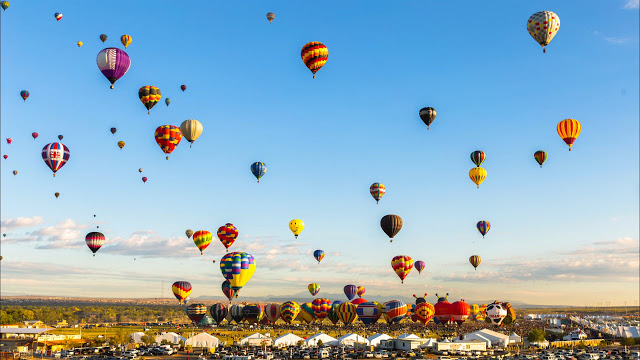 Watch over 500 brightly colored hot air balloons paint the skies with their vibrant hues and designs at the Albuquerque Balloon Fiesta. A yearly event occurring in early October, this festival lasts for nine days straight and is a great place for those who love photography and those looking to witness a spectacular visual experience. The balloon fiesta is one of the largest hot air balloon festivals in the world and attracts more and more people each year with up to 100,000 people on the launch pad of the balloons each morning. The balloons take flight each morning and there are also coordinated flights throughout the day that send all the balloons up at once over the Sandia mountains. If the balloons don’t interest you as much there are also art shows and live concerts put on throughout the day.

With over 2 million visitors in the streets each day to witness the magic that is the Rio Carnival, it is no wonder that it has become known as one of the biggest and most iconic festivals out there. The Rio Carnival happens each February and is held just before the beginning of Lent. One of the first carnivals of Rio dates back to 1823 and has been going strong ever since. The carnival is basically one big party that consists of dancing, music, and partying for five days straight along with blaring samba music, exotic dancers, elaborate floats, and chaotic street parties. There is little to no structure of this carnival and consists more so of a bunch of mini dance parties within the crowds. Besides the spectacular parades with the huge floats, there are also a multitude of other events to enjoy such as balls and concerts. 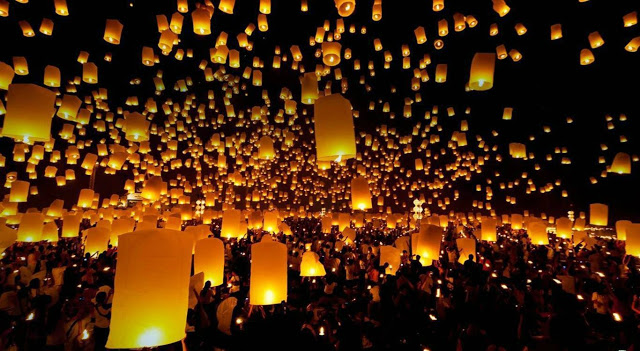 Stare in awe as the sky lights up with a million different lanterns at the world’s largest known lantern festivals. Originating in the Xing dynasty over 2000 years ago, the Pingxi Lantern festival is loved by many and attended by thousands each year. The idea for the festival pulled inspiration from life back in the day more specifically, outlaws would frequently raid the villages forcing the villagers to run and hide in the mountains. A village watchmen would then send off ‘fire balloons’ when the coast was clear and the villagers were able to return to their homes. Today the lanterns that are let off at the festival have two different meanings: the first being that each lantern has the hopes and dreams of the person who purchased the lantern written on it and they also celebrate the end of the Chinese New Year period and symbolizes the shedding of outdated habits as well as a way to embrace the future.

Held on a 700 acre farm each June and lasting for four days, the Bonnaroo Music festival hosts about 80,000 people each year. With one of the most diverse ranges of music genres for a single festival, Bonnaroo has multiple stages with live bands playing their music well into the night. Some of the music genres on display at this festival include pop, metal, indie, jazz, folk, country, and hip-hop to name a few. The headliners that have performed here in the past are equally diverse and different from each other with the likes of Metallica, Paul McCartney, Kanye West, Bob Dylan, and Mumford & Sons adorning the stage. If you’re looking for a break from the music for a bit, festival goers can also wander the grounds and find artisans selling products, food and drink tents, a comedy tent, cinema tent, and a huge ferris wheel to enjoy.

Which one of these festivals would you most like to attend and why? Tell me all about it in the comments below.