Despite what we all may think, the magical places found in some of our favorite Disney movies aren’t all fake, imaginary places. Most of the iconic buildings and areas in these movies have been created using inspiration from real life places. From the ice castle that helped create Queen Elsa’s palace to the scenery found in Scotland that inspired the movie Brave, theses stunning real life locations are a fairy tale all on their own. If you’re a Disney lover like myself and you’re looking to feel like a Disney princess, be sure to add these destinations to your bucket list to ensure that you can have the most magical vacation ever.

Perched up on it’s own little island, surrounded by the waters  of Lake Geneva in the south of Switzerland lies the Chillon Castle. The castle was built during Roman times and was used as a hospital, a prison, and also as inspiration for my all time favorite Disney movie, The Little Mermaid. The Chillon Castle was used to help create Prince Eric’s seaside castle as well as the rooms within the castle. Now serving primarily as a tourist attraction, the Chillon Castle sees about half a million tourists each year.

Considered to be one of the eight wonders of the world, the Taj Mahal, is a palace filled with unique architectural beauty. The palace was built over the span of 22 years and is used to house the tomb of Queen Mumtaz Mahal, the wife of India’s old ruler, Shah Johan.  Though the Disney classic of Aladdin is based hundreds of miles away in the Middle Eastern country of Jordan, the Taj Mahal was still used as the primary source of inspiration for the Sultan’s palace in the movie. Both palaces have the same rounded roof tops and distinctive ivory color. 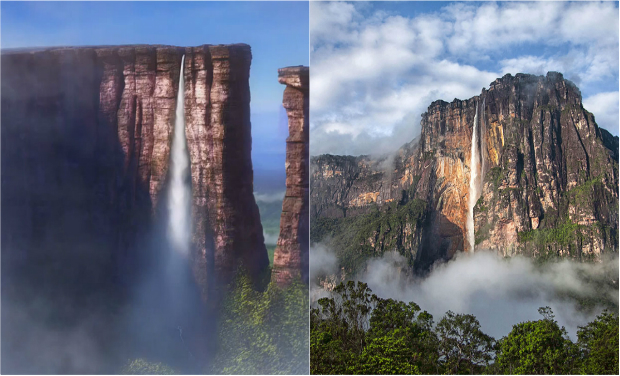 In one of the cutest Disney movies, Up, the main character’s dream is to tie enough helium filled balloons to his house to be able to soar above the famous Paradise Falls. Though you most likely will not be able to do the same thing, you can still visit the waterfall that inspired Paradise Falls. Found deep inside the jungle in Venezuela is Angel Falls, the highest waterfall in the entire world. At a height of over 3,000 feet, the Angel Falls fall from a mountain called Auyantepui , which is one of the biggest table-top mountains in Venezuela.

Found on the outskirts of Quebec City, the Hotel de Glace is a wonder to see. Built every winter using only ice blocks and snow, the Hotel de Glace was the perfect source of inspiration for the popular movie Frozen. Producers from the movie stayed in the Hotel De Glace to get a feel of the place and to see how it was created. This helped them to make Queen Elsa’s castle come alive drawing heavy comparison to the ice hotel. Dress warm and make the trip to Quebec City’s ice hotel and spend the night to really feel like you’re also an ice queen. 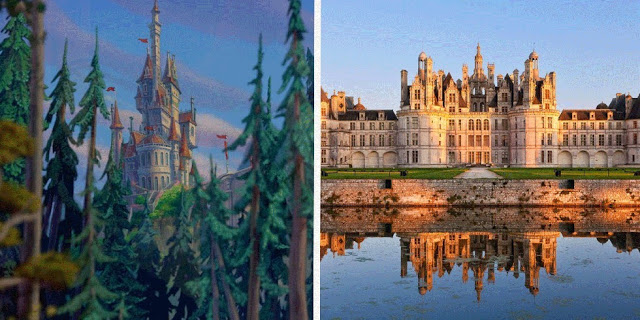 Seeing as the movie Beauty and the Beast takes place in the heart of France, it is no surprise that the inspiration used to design the Beast’s magnificent castle is one of the most recognizable castles in the world, the Chateau du Chambord. With the many chimneys and spires decorating the roof of the palace, many people say it looks like its own little city skyline. We can see the similarities with Beast’s castle as his also has multiple towers sticking out of it. The Chateau du Chambord was built in 1547 and was only originally used as a second home for the owner and as a hunting lodge. Now used as a tourist attraction, the chateau attracts over 700,000 tourists per year, making it one of the most visited castles in France.

One of the only Disney movies that feature an actual depiction of a city rather than a rendition of it, the Princess and the Frog was based in the vibrant American city of New Orleans. Also one of the only Disney princess movies that doesn’t have a palace, what it lacks in castles though makes up for with the uniqueness and colorful atmosphere that New Orleans has. Throughout the movie, scenes depict basically all of the city from the French Quarter to the Bayou and even the Mississippi River Delta. The Princess and the Frog does a great job of depicting such a culturally rich city that is in the process of rebuilding itself after the devastating hurricane in 2005, that ravaged most of the city. Not only does the movie tell the story of Princess Tiana, it also sheds light on a city working to come back. 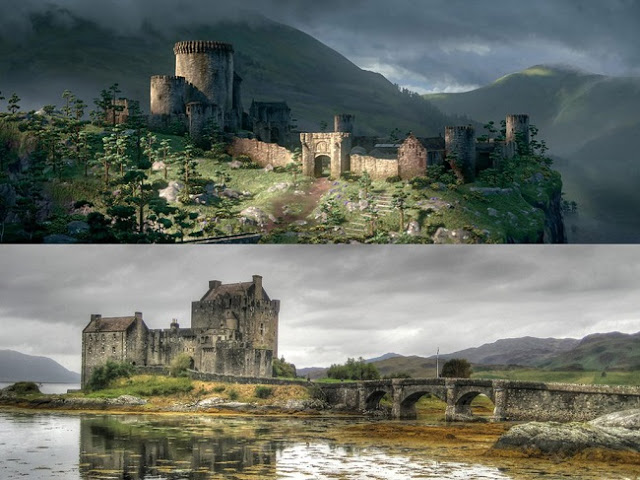 The movie Brave about Princess Merida is set in the Scottish Highlands, surrounded by stunning scenery and rolling hills. The movie takes inspiration from multiple places in Scotland, one of them being the Eilean Donan Castle. Sitting perched up on its own little island this majestic looking castle was built during the 13th century and was restored back to its original state during the early 1900’s. Throughout the movie, there are several scenes depicting the beauty that is the Eilean Donan Castle as it helped create the Royal Castle in the movie. The castle remains a popular tourist attraction today with thousands of people flocking to the area each year. Another recognizable monument that helped inspire parts of Brave was the Callanish Standing Stones. One of the most important scenes of the movie sees Merida found within a stone circle which closely resembles the formation that the Callanish Standing Stones has.

Hawaii is a popular tropical destination for those looking for some fun in the sun and with its white sand beaches and crystal blue waters it is no wondering why it is popular among tourists. Hawaii is not only favored and enjoyed by tourists, it is also quite popular with Disney writers. The artwork and vibe of the movie Lilo and Stitch pulls most of their inspiration from Hawaii and more specifically the island of Kauai. To create the village in which Lilo and Stitch lived, producers for the movie were inspired by the homey village of Hanapepe with its tin roof houses and wooden sidewalks.

Based off of the tale of Rapunzel, the movie Tangled was created with inspiration from one of France’s most stunning places, Mont Saint-Michel. The kingdom of Corona in the movie is highly influenced by the castle located in the town of Normandy. Situated on its very own island surrounded by water the Mont Saint-Michel is a pilgrimage for those visiting Europe and is built on a rocky islet with hotels, boutiques, and restaurants around it for tourists. Though Rapunzel’s castle was created using bits and pieces from numerous different castles, the main source of inspiration came from Mont Saint-Michel. Producers for the movie visited this area first before researching any other places and fell in love with it from the start even going so far as being adamant that Rapunzel’s castle must also be on an island much like Mont Saint-Michel.

Throughout the movie, The Emperor’s New Groove. it is clear that the art and the design are heavily influenced by the Incan culture with Pacha’s village built atop a mountain that looks similar to the ruins of Machu Picchu. The creators of the film drew much of their inspiration for the film from this area to create an empire for Kuzco, the main character in the movie. The ruins of Machu Picchu sit atop a mountain at over 8000 feet above sea level and were built around the year 1450. The ruins can be found in the region of Cusco in Peru, which is also how the Disney creators came up with the name of their main character. Machu Picchu is visited by millions of tourists yearly and is considered to be Peru’s most famous tourist attraction.

Marvel at one of Germany’s most well-known attractions and the majestic inspiration for one of Walt Disney’s last movies, at Neuschwanstein Castle in Bavaria, Germany. Built in 1892, the spires and turrets of the castle helped to inspire Princess Aurora’s palace in The Sleeping Beauty. Walt Disney himself along with his wife Lillian went on a European vacation and visited the castle before the building of the iconic castle that is the center piece for Disneyland. Walt Disney pulled elements from the fairy tale like Neuschwanstein Castle to help him create Sleeping Beauty’s famous castle. Now more commonly known as the ‘Sleeping Beauty’ castle, Neuschwanstein Castle is one of the most famous landmarks in the entire country and sees hundreds of tourists daily.

Stretching out over a length of  3,000 kilometers and passing through eight different states from Chicago to Los Angeles, Route 66 is one of the most famous and well-known highways in the country. Lots of tourists decide to road trip along this stretch of road each summer to stop at all of the famous monuments and attractions along the way. One of those attractions is the Cadillac Ranch in Texas that was created in 1974 and is a row of brightly colored cars buried in the sand along the road. This iconic landmark helped to inspire the creators of the Disney movie Cars, with a few other attractions along Route 66 making an appearance in the movie. The Cadillac Ranch can be seen as similar looking mountains on the horizon of the town that Cars is set in, Radiator Springs. Ramones’s paint and body shop in the movie is also designed to resemble the U-Drop Inn, an art deco restaurant and gas station in Shamrock, Texas which is a main tourist attraction along the Route 66. 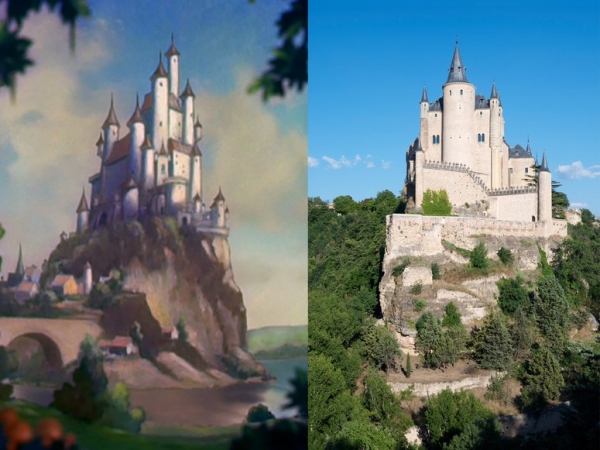 Found in central Spain and perched high up on a cliff surrounded by two rivers on each side is the majestic looking Alcazar Castle. Though this castle is thought to also be part of the inspiration for Cinderella’s castle, the castle in Snow White and the Seven Dwarfs resembles the Alcazar Castle the most. The castle was used by multiple Spanish monarchs throughout the years until it was badly damaged by a fire in 1862. It was however refurbished and fixed up to become one of the most popular tourist destinations in Spain and is an iconic monument due in fact to its beauty and grandeur as well as the way the castle is placed giving it a similar shape to the prow of a ship.